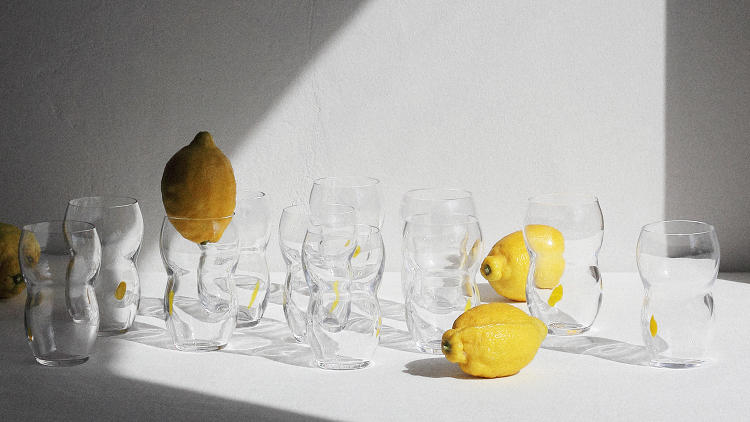 Max Lamb lives in a material world. On any given day, the London-based designer could be cutting and folding sheets of zinc, like he did for a bar at the Ace Hotel in Shoreditch. He could be sifting through marble aggregates, like he did fora terrazzo-like engineered stone, or figuring out how to drape a latex curtain, like he did for an Opening Ceremony pop-up shop. This year, you'd likely find him blasting spun-metal stools with enamel, like he did for a spring product release with the startup e-tailer Hem.

The 35-year-old conceptual designer is known for his works that occupy a middle ground between sculpture and furniture and represent an obsession with materials and process. While his works are rigorous investigations into how objects are produced, they often embody cleverness and wit.

For example, in a recent installation for Nike, he carved a massive granite block and fit it with an air compressor so that it levitated ever so slightly above ground (picture an air hockey table) and could be moved with relative ease. For New York design week, Lamb debuted a new hand-blown lemonade glass for Makers & Brothers, an Irish purveyor of artisanal design, which features a silhouette inspired by two lemons stacked on top of each other.

We caught up with Lamb for a chat about making it in the business, why he never starts a project with an idea, and why designers ought to take a page from Robin Hood's book.

Co.Design: Tell us about your interest in process, materials, and the final product. Which of those ends up being the most engaging to you?

Max Lamb: The root to my work, or the foundation, is based on the material that I use to create these ideas. The final object—the product—is kind of a three-dimensional manifestation of this idea. It doesn’t exist without the material.

I always start with the material and with the process, never with the idea. It kind of somehow depends on what I’m doing. Increasingly, I’m doing interiors compared to in the past when I was doing only furniture. So I am always making furniture designs and a lot of the time speculatively. It's self-directed work rather than specific briefs or commissions. Every project that I do is context-specific. Even though I have this general ethos applied to my work, the brief manipulates it somehow.

When it comes to the digitalization of design, it’s not really like something I consider a "thing." If it’s useful, or if it’s right, or if it’s appropriate, then I’ll adopt it as a process in relationship to the material that I’m using to kind of make the piece with. It’s always context-specific, always, but the root of it is the material.

When you were at [British designer] Tom Dixon’s studio, what did you learn from him that you’ve adapted into your own processes and then taught to others?

Tom has a lot of energy and he also has an incredible business sense, and I’m terrible at business, or at least was and maybe still am—I don’t really know. But I guess I’m here and self-employed. I run my own studio so it can’t be that bad. But I feel like Tom imparted this ability to turn any situation into an opportunity and to be creative with business.

When I first joined the team, I was still a student doing an internship between my first and second year, and it was the year that he launched the EPS chair, which was this free giveaway chair. It was designed for the public, so he thought, "Let’s take over Trafalgar Square. Let’s mold 500 chairs and give them away to the public."

There’s something quite beautiful in that the general public gets to consume and to enjoy design, and they get it for free yet a big organization or corporation pays for it somehow. [Editor's note: A packaging company sponsored the installation for the 2006 London Design Festival.] So it’s kind of using these "powers" to fund the project. It’s very Robin Hood, like "stealing" from the rich and giving it to the poor. So you kind of take these big companies that have a lot of money that are basically paying for a designer to elevate their brand and then you give it all away to the public.

It’s kind of this altruistic role a designer can have.

So all designers should be a bit more like Robin Hood?

Most of your work is craft-oriented, more one-off, but there have been situations like a building material or a stool that are put into production. How do you balance those two things business-wise?

I do projects that are more commercially led, but to be perfectly honest the most commercial projects are the self-directed projects—so the projects I produce myself in my studio, the one-off pieces for which I work directly with clients and customers, like Johnson Trading Gallery, in New York.

In the long run, they’re definitely the most profitable, to give a top secret away. In those situations, I’m designing for the minority. I’m designing for individuals, but there’s something very beautiful about it because—like this conversation between you and me—it’s very personal. So I will design something for you, that you want and I’ll make it myself in my studio. I’ll possibly deliver it to you and install it myself. There’s a premium to be paid for that.

I might do five or six projects like that per year. But what they do is keep my studio afloat. They consume a lot of my time because I’m working so intimately on the production of those pieces. But what they do is they liberate some time for me to design products for manufacturers, which don’t pay anything like as much because it’s based on royalties. That’s also maybe due to the types of companies and producers that I’m working with and collaborating with; they’re smaller.

I designed some crystal for Lobmeyr in 2009. It's an amazing historic, established company in Vienna with beautiful craftsmanship. The value of their product is quite high, but they’re not shifting volumes, and the compensation for me is very small in comparison to me making a one-off piece. It’s not like I’m charging a premium; I’m charging what it’s worth.

When I’m a designer and a maker, the values are so very different. The manufacturing or the making of something—the transformation of a concept into a product—that’s where the value lies, it seems. When I make something I design, it holds a far higher value than if I were just the designer. Although design is all about the idea—and without the designer an object doesn’t exist—if I manufactured a piece myself and make it myself, then all of a sudden I get to benefit from both the design value and the product value. That’s why that side of my studio helps fund these more higher volume, democratic projects. I trained to be an industrial designer. I always thought that would be my destiny, designing for industry. But the market controls things.

Do you think that’s why a lot more independent designers are bringing everything under one roof where they are the retailer, the designer, the manufacturer?

The Internet and the digitization of design are changing the way the industry operates, the way consumers operate. Consumers are in control. Everything is accessible these days, and along with that you have this whole theory of globalization. Yet humans are individual and we like to have personal, private things keeping with our identities.

We as human beings are hungry for the unique, the bespoke, or the personal. Something that is wholly personal. So the hunting is part of the pleasure of the consumer these days. They enjoy the hunting and this sense of discovery, so the models have changed completely.

Yes, there are a lot more designers. But luckily if you’re clever or you’re smart or you’re business-savvy, you’ll find a customer base. You’ll find an outlet for your work. If it means having a small studio space in Brooklyn or in London, where I live, and catering to a fairly small audience, but catering exclusively for them on a personal level, then you can sustain a business.

Is there any advice you’d give to young designers or people who are coming out of school, just starting a business? What should they keep in the back of their mind when they’re starting a venture?

Don’t design on paper. Or on a screen. Design in a workshop.